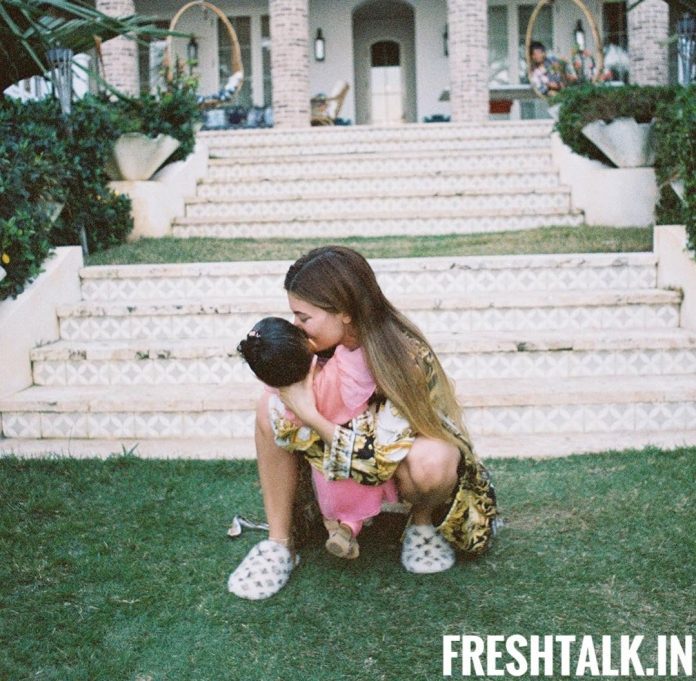 Kylie Jenner took to Instagram and shared the most adorable picture of her little baby girl Stormi.

Captioning the picture she wrote ” My Baby”.

Being a star kid, Stormi always so fashionable. She can be seen dressed in a white T-shirt and shorts with a matching light shade blue denim jacket. Her little bit jewellery in her ears was adding a little more charm to her looks with a different unmatched pair of shoes. Many
fans of Kylie desire to dress like Stormi. She looks pretty osm in that picture.

She even poses like a professional model. She can be seen looking downwards when the picture clicked. The trillionairelife, a page on Instagram quoted the picture as ‘Queen Kylie’s whereas one of the fans commented ‘ she’s even posing like her dad’.

Kylie Jenner is best understood for her lead job in modelling and as an entrepreneur. She is founder and owner of a cosmetics company named ‘Kylie cosmetics.’

In June 2018, Kylie deleted most of her post of baby Stormi and said she would no longer be sharing Stormi’s pictures. But she was not able to do so and continued posting about Stormi.

By posting regular pictures of her and Stormi, even after pregnancy Kylie Jenner manages to keep herself in buzz. And got her Instagram, social media and Snapchat queen title again.

For Kylie’s fans, Stormi is the cutest baby they have seen. And the way Kylie dressed her is super fabulous. Kylie has achieved a lot in the past few years and she is an inspiration for many.

Within 8 hours of the photo being uploaded by Kylie on her Instagram handle, the post received more than 4 million likes.

Fans loaded the picture with pretty comments showing their love and care for Stormi. We can also say that Storm is a born star.

Thank you so much, Kylie, for giving us a chance to see Stormi growing.