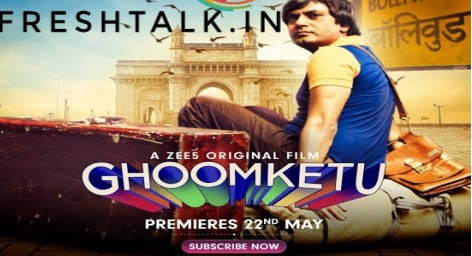 In the latest movie Ghoomketu, Nawazuddin Siddiqui plays the role of a writer who is nearly failed but jovial writer. He titles a book ‘How to become a writer in 30 days’ with him.

A young aspiring writer from Mahona village in UP. He runs from the village to Maya Nagri Mumbai with a dream to become a screenwriter and make a place for himself.

If he is unable to find real worth for his stories he will have to return back to his village where his very angry father is waiting for him. In Ghoomketu one can see a newly failed writer who is friendly and happy enough.

He likes to keep a book titled ‘How to be a Bollywood writer in 30 days’ with him. His family loves to laugh mostly on his dada who is the head of the family and gets the anger for a short period.

The role of the head of the family is played by (Raghuvir Yadav) who keeps getting a short period of anger. Yadav played the role of a person with middle-class qualities and his act is considered to be watched. It becomes difficult for the viewer for not laughing whenever he shows his anger.

Director Puspendra Nath has brought back the essence of a small village. The role of bua is played by Ila Arun who is almost impossible to understand. The role of Arun is very funny in a strange and unusual manner and seems to enjoy.

Ghoomketu is the first film in Bollywood which is released on the OTT platform. As amid the lockdown cinemas are closed. Although the movie was completed in 2013-14 it had to wait for 6 years for finding its platform. Nawazuddin might lack his innocence in Ghoomketu, he showed his capability by switching gears with less difficulty.

Anurag Kashyap played the role of lazy corrupt police. He said his role was easy as he is a reluctant actor. He prefers to go with short sentences and short pauses. He does not prefer to put more stress on words, something characters of cop are know for doing so in Hindi films. The focus remained on Siddiqui, not on Kashyap.

The film Ghoomketu is fairly written and performed especially between Siddiqui and Brijendra Kala. They maintained the speed, activity and event of the story.

The sweet film relies on comedy is Ghoomketu. The primary actors have performed their job very well and the movie is a good mood mind lifter as well as diverter at around 100 minutes. It is also a kind of lesson to other filmmakers to make a movie within limited resources.
Ghoomketu is streaming on Zee5 and its Current rating is ⅗.

Some of the reviews by netizens are

“I do not know why the overall rating is so low. I loved everything about the movie. Direction, storytelling, acting, everything. The Bollywood movie mafia never appreciated the good movie and this is an example. This is ahead of time. I am sure it will be appreciated more in future.”

Review by another netizen”This movie starts with a list of really good actors but the script is so underworked that these same actors are left with nothing to perform …. Editing and Direction is so pathetic that in few scenes you can make the performances of the actors are abruptly chopped off in editing. This movie exactly what we didn’t need in lockdown. So, guys, it’s safer to watch this movie post lockdown so that you can at least go out and feel the fresh air and let your mind relax ….” This shows that the movie is liked by people.