Known as the charming and bubbly girl, 25-year old Nia Sharma is the face of a new generation. She is often seen busy in her shoots but a few days back she was found having a gala time at the beach in Goa. She posted a jaw-dropping picture of herself on her Instagram handle raising a glass. She was seen accepting her flaws with the caption “So Flawsome.. Cheers to our flaws and still being awesome”. She is in Pondicherry for the shoot of Jamai Raja 2.0 with her co-stars Ravi Dubey and Achint Kaur.

Nia Sharma was ranked the 3rd Sexiest Woman of Asia from the top 50 in the year 2016. She doesn’t have many serials to her name but she still has managed to achieve fame and respect from the audience. She has an amazing personality and killer looks which never fails to stun her fans. She has 3 million fans on Instagram which clearly tells the huge popularity she has among the people.

Amidst the busy schedule, the actress seems to enjoy every bit of her time on the beach and also not letting her fans miss her!

The Internet has this “amazingly unexpected” reaction to Elliot Page coming out as a transgender. 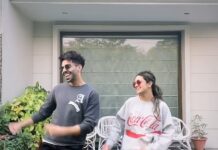