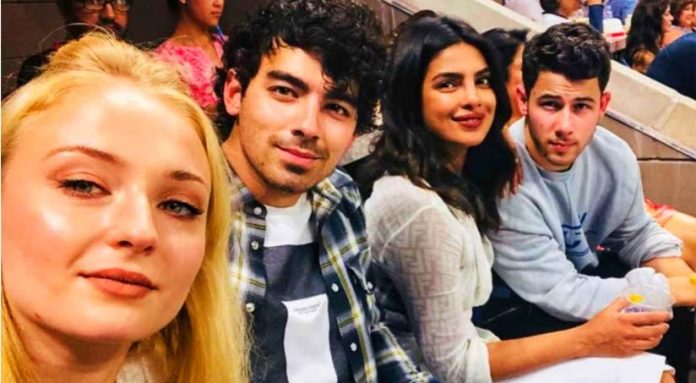 International singer Nick Jonas shared a photo of his brother, Joe Jonas and Sophie Turner on the wonderful occasion of their first wedding anniversary. Joe and Sophie had a beautiful France church wedding on June 29, last year in the presence of close friends and family. The couple had already exchanged vows in a surprise wedding in the month of May 2019. Currently, the adorable couple is expecting a baby together.

On Tuesday, Nick Jonas shared an awestruck picture from the wedding of Joe and Sophie. The picture was highly loved and shared by the fans when Joe himself shared it on his Instagram last year. The American singer wrote, “Happy Anniversary Jophie. Love you guys!” and tagged the couple.

Bollywood Sensation Priyanka Chopra too wished her dear Joe and Sophie on their first wedding anniversary. The Baywatch actress shared the same picture before her husband did with a sweet caption saying, Happy 1-year anniversary. Love you both.”

The Game of Thrones actress and the Jonas Brothers singer’s wedding last year took international media by storm. It was the most awaited wedding of the year. With close family and friends in attendance, the couple got hitched, the week-long celebrations were a blast and several pictures went viral.

Sophie and Joe have been tight-lipped about pregnancy and not addressed it as yet. However, they have been spotted quite a few times in public and Sophie has proudly shown off her baby bump. They also attended a Black Lives Matter protest and participated in it whole-heartedly.