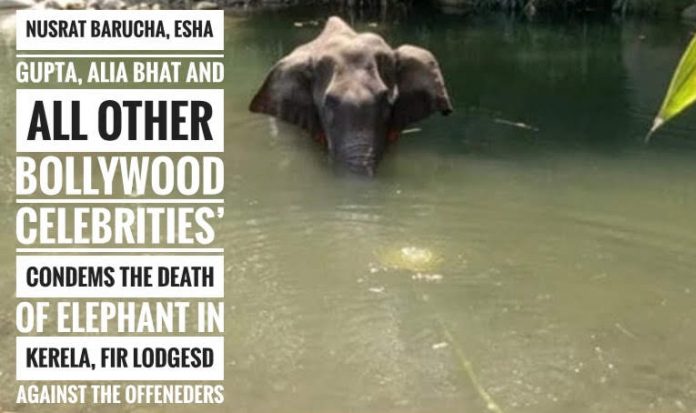 The news of a pregnant elephant’s death in Kerela after being fed with cracker filled pineapple is left everyone heartbroken and speechless.
FIR lodged against the unidentified people under relevant sections of the wildlife protection act over the incident happened in Kerela to know about the whereabouts of those who allegedly placed cracker stuffed pineapple.

Reportedly, the pregnant elephant had left the forest of the silent valley in Palakkad district in search of food to nearby villages. According to forest officials, the elephant was suspected to have eaten the pineapple filled with firecrackers.

After consuming fruit, she eventually walked up to Velliyar River and stood up there. It has been seen in pictures that she put her mouth and trunk in the water, perhaps to get some relief from excruciating pain. Forest officials said that it must have been done by her to avoid flies and other insects on her injuries.

Two captive elephants, Surendran and Neelkanthan, were brought to bring her out from water but they failed after a number of attempts. As if she got understood that these are her last few breaths and died at 4 pm on 27th May.

This kind of fruits usually used by locals as bait to protect their fields against wild boars.

Forest officer Mohan Krishnan showed his grief by saying, “She trusted everyone. When the pineapple she ate exploded, she must have been shocked not thinking about herself but the child she was going to give birth in 10 to 12 months”

Whole Bollywood fraternity hugely condemns the death of an innocent elephant who fall prey of the cruel activities of human. Celebrities like Nushrat Bharucha, Esha Gupta, Alia Bhatt and many others have also taken to Twitter, Instagram and Facebook sharing their shock over the tragic incident.

Shraddha Kapoor slammed this inhuman act and wrote on her Instagram handle;

“How can something like this happen? Do people not have hearts? My hearts has shattered and broken. The perpetrators need to be punished in the strictest way”

Actor Vidyut Jamwal questioned whether this is the new world post-covid-19.

This incident put so many questions on the actions of the human race. Tears of animals have been asking “why Humans are so indifferent, selfish and cruel towards them”.

We as a human should listen to the plight of animals as they can’t even speak and express their grief.