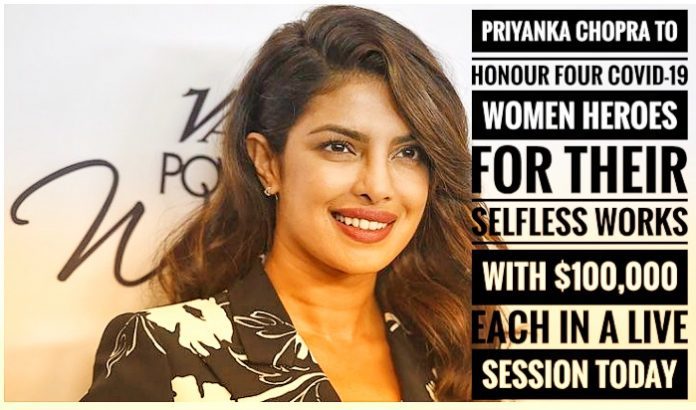 Priyanka Chopra Jonas, the global enigma, has been working towards fighting COVID-19 alongside many worldwide organizations. She has been using her social media platforms in raising awareness about the widespread pandemic.

She has, like many other celebrities, been successful in raising millions of dollars for the funds set up by some world and national organizations who are helping those who need it the most like funds for providing food and protective gear to the homeless, funds for the people working in essential services and healthcare and so on and so forth.

Priyanka Chopra has been tirelessly trying to help those working on the frontlines during the COVID-19 pandemic, especially women. The actress earlier announced on social media that she will be rewarding four women with $100,000 each who have been the heroes during this dark time and helping others in association with BON V!V Spiked Seltzer and she also asked for nominations from her fans.

She shortlisted four of them which were:

Laura from California works at a homeless outreach and support centre that provides bathrooms, showers, and laundry services.

Jessica from New Jersey has been putting together care and safety packages for domestic violence shelters and survivors who have been affected by this crisis.

Tamy from Washington is an environmental service worker, cleaning operating rooms and emergency rooms at her local hospital.

Crystal from Tennesse is a physician assistant in the ER and First Lieutenant in the US Army.

She also announced that she will be commemorating these women through her Instagram Live session which took place at 3:30 am Indian time early this morning. Last week, she had also commemorated four other women who have emerged as heroes in this pandemic. This initiative
has been commended by a lot of people. This not only honours the women at the front lines but also inspires the rest of the world to be selfless like them.

In addition to honouring these women, Priyanka Chopra is all set to join International stars like Lady Gaga and John Elton to raise funds for COVID-19 through a LIVE concert organized by World Health Organisation (WHO). The event will take place on April 18 and will see many superstars coming together for the One World: #TogetherAtHome live event. The event will start at 11:30 pm India time and will feature various influential people from all around the world.

Priyanka Chopra took to social media to announce about the event and wrote, “On April 18th @glblctzn will host One World: #TogetherAtHome, the first of its kind global broadcast event in benefit of the @WHO COVID-19 Solidarity Fund. We’ll be honoring healthcare and front line
essential communities.”

The actress will be joined by Bollywood superstar Shah Rukh Khan along with stars like Lady Gaga, John Elton, Coldplay, John Legend, Stevie Wonder, Billie Eilish, Taylor Swift and Lizzowho will be playing at the live concert.