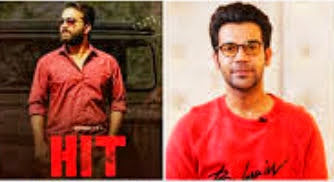 B town’s real actor who is known for his natural acting skills, Rajkumar Rao will be next seen in the Hindi remake of Telugu thriller ‘HTI’ directed by Sailesh Kolanu who made his directorial debut from HTI only. Sailesh will also direct the Hindi remake of HTI.

HIT stands for Homicide Intervention Team. Vishwak Sen played the lead role in the Telugu film and Rajkumar Rao will be seen in the lead in the Hindi remake of same. HTI is the story of a cop who is on the trail of a missing woman. HTI released on 28 February 2020 and collected 6.87 crores on box office. It was a huge blockbuster of the south.

On Giving Rao lead in HTI, the filmmaker said that Rao is the one who can do justice with the lead character of HTI because “ The first case of HIT tells the story of a police officer who is constantly fighting a battle with his past and his present. So it’s a troubled character. I wanted to cast someone who can bring that darkness to the role and still make the audience root for him with a matured performance. I felt that Raj can evoke that kind of response. I have been following Rajkummar’s work ever since I watched Shaitaan. He is a terrific actor and has managed to surprise us every time with his performances.”

Meanwhile, Rao said on the project that “When I saw ‘HIT’, I instantly connected with it. It’s an engaging story, relevant in today’s environment. As an actor, I am always on the lookout to play characters I haven’t explored and ‘HIT’ gives me a chance to do that. I’m looking forward to taking this journey”.

In the south HIT” is planned as an investigation franchise and Kolanu really wants to follow that in Bollywood as well. He also mentioned that  “I feel the premise of ‘HIT’ is very global. But I will be making some minor changes to suit the sensibilities of the audience all over India”. “HIT” is now in pre-production and will go on floors in 2021.

Raj Kumar Rao’s sunkissed selfie is so heartwarming: Check here for the post