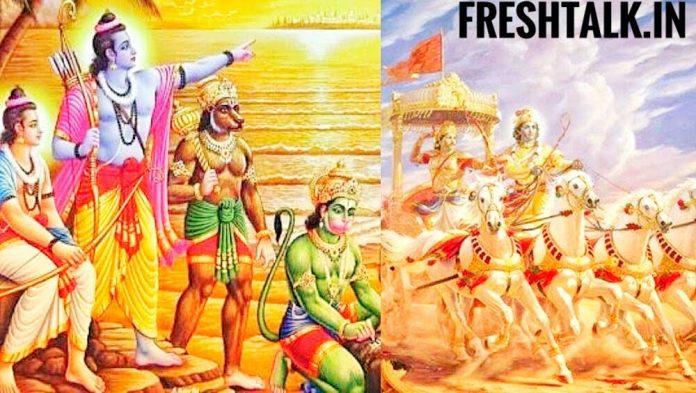 The Mahabharata is an ancient Indian epic, written by Sir Krishnadaipawan Bedbash, where the most story revolves around two branches of a family- the Pandavas and Kauravas – who , in the Kurukshetra war , battle for the throne of Hastinapura. The story begins when the blindness of Dhritarashtra , the elder of two princes , causes him to be omitted in favour of his brother Pandu as king on their father’s death .A curse prevents Pandu from fathering of children , however and his wife Kunti asks the gods to be father children in Pandu’s name. As a result , the god Dharma fathers Yudhistira , the wind fathers Bhima , Indra fathers Arjuna , and the Ashvins father Nakula and Sahadeva.

On the other hand Dhritarashtra has a wife named Gandhari. They has passed the same problem. Gandhari gave a birth of a solid flesh. From their the 100 of Kauravas are borned. The enmity and jealousy that develops between the cousin forces the Pandavas to leave the kingdom when their father dies. In a while they got the place Indraprastha. There they makes the own palace. During their exile the five jointly marry Draupadi and meet their cousin Krishna, who remains their friend and companion thereafter.

Unfortunately they lost there palace and everything including their wife in gambling alias PASA, there Draupadi was embarrassed by evil Kauravas, fortunately Lord Sri Krishna saved her , for the loosing of palace they went to jungle for this time for 12 years. There they learns about the strategy for war in jungle. They have another rule that after 12 year they have to stay in disguise for 1 year. They stayed for 1 year in the country of king Uttar. After passing that penalty they came back ask for there land then Durjadhan refused. Then they chooses the war Lord Sri Krishna supports them. And at last they won the war.

Ramayana started with the birth of Shree Ram, this story is written by the monk Balmiki.The reason for why Lord Vishnu had to taka avatar of Lord Rama was to sustain Dharma by killing the Asura Ravana. One day, four Brahma mansa putras , come to visit Vishnu at his abode , Vaikunta. There the guards of Lord Shree Venkateshwar, stopped Bramha putra. They give a curse that to take birth with Sri Venkateshwar as villain of him. Then those guards are the Ravana and Kumbhakarna.

Ramayana was a crucial influence on later Sanskrit poetry and Hindu life and culture.
Ramayana is one among the 2 major Sanskrit epics of ancient India , the opposite being the Mahabharata. Along with the Mahabharata, it forms the Hindu Itihasa.
The epic , traditionally ascribed to the Maharishi Valmiki , narrates the lifetime of Rama, the legendary prince of the Kosala kingdom.It follows his fourteen year exile to the forest by his father king Dasharatha , for the asking of his step mother kaikeyi. His travels across forests in India together with his wife Sita and brother Lakshmana, the kidnapping of his wife, due to the Surpanakha, by Ravana, the great king of Lanka , resulting in a war with him.

In this war Bhuvisan, who supports the good ideal. So he was exiled from the Ravana’s country. There has a another character named Hanuman who was the son of wind god Pawan, Hanuman has excessive power and the loyalty for Lord Shree Ram. There has an another character named Sugreev. Lord Shree Ram fights with Ravana with the Sugreev’s army and Ram’s eventual return to Ayodhya to be crowned king.There are many versions of Ramayana in Indian languages , besides Buddhist , sikh and Jain adaptions.

But Ramayana is written in other countries like Myanmar, Sumatra, Java, Sri Lanka & etc.
So in the television first Mahabharata was produced. There the actors were beautiful. The acted beautifully. The actors are Nitish Bharadwaj (Shree Krishna), Puneet Isher (Duryodhan), Rupa Ganguly (Draupadi), Pankaj Dheer (Karna), Gajendra Chauhan ( Yudhishthir),Pradeep Sing Rawat, Raj Babber, Goga kapoor,Sarat Saxena and etc. This series was much popular in that time.

By seeing this Ramayana was released. In there the actors also acted very good and made the Ramayana very good. Not just Ramayan, but other TV shows of Doordarsh like Mahabharat and took the top spots on the list. Talking about the BARC report, in the rural segment, Ramayana which airs on DD National procured 27169 impressions on the first position, while Mahabharata which telecasts on DD Bharati came on the fifth position with 6228 impressions. Talking about the urban segment, Ramayan topped the list again with 34228 impressions while the other epic show gained 10524 impressions. That statistics doesn’t matter Mahabharata is another good series now a days. For the longest story the spectators interest is less in Mahabharata.