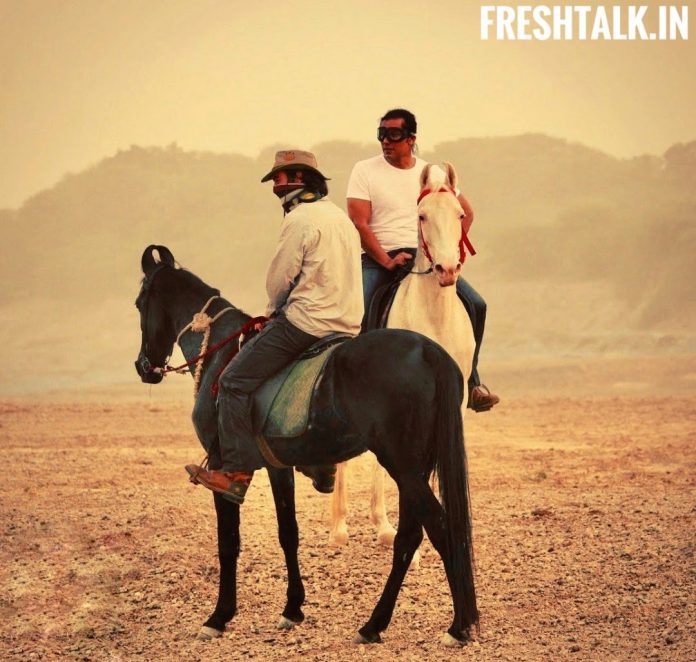 Randeep Hooda is an equestrian sportsman and his love for horses is well known. Randeep Hooda owns a horse at Mahalaxmi stable in Mumbai. The actor was able to meet his horse name colossus from last 3 months due to covid 19 pandemic. As the Maharashtra government eased the lockdown restrictions Randeep Hooda meets his horse after a long time. We got exclusive pictures of Randeep Hooda with horse Colossus and dog Bamby which he captioned as a loving reunion.

On may 16 he shared a horse riding video by captioning it as” waiting to get back on the horse & fly ” that was a throwback post showing his eagerness to meet his horse. Randeep Hooda was born in Rohtak, Haryana and a down to earth personality. He is an intense actor and also considered as India’s most attractive celebrity.

His posts on tigers, birds, horses and dogs etc always show his love for animals. In 2016, Randeep Hooda adopted 9 horses that were on the verge of dying. He wanted to adopt them earlier but he didn’t have a proper space for rehabilitation. He has done some unconventional Bollywood roles creating waves. Hooda bought a farmhouse in gurugram too where he shelters more than 40 superior breeds of racing horses. He has a polo club there also. Randeep always cares about his horses as parents do for their children. Even in the middle of hectic pressure and double shifts he finds time to ride a horse and pamper them.

Hooda also raised public awareness of chronic hunger in 2010. He spent most of his childhood with grandmother. He had a good relationship with his parents who lives in Faridabad and now Hooda also wants to spend more time with them.

His authenticity of language and love for his culture is always shown in his behaviour. He often posts on Instagram with captioning them in Haryanvi. His looks and acting is not the only reason behind his 2 million Instagram fans but there is much more than we see with our eyes. Hooda owns a stray dog too named candy. Not only his professional life but his personal one is also super osmm….. You rule, Mr Hooda! With lots of best wishes and love.…