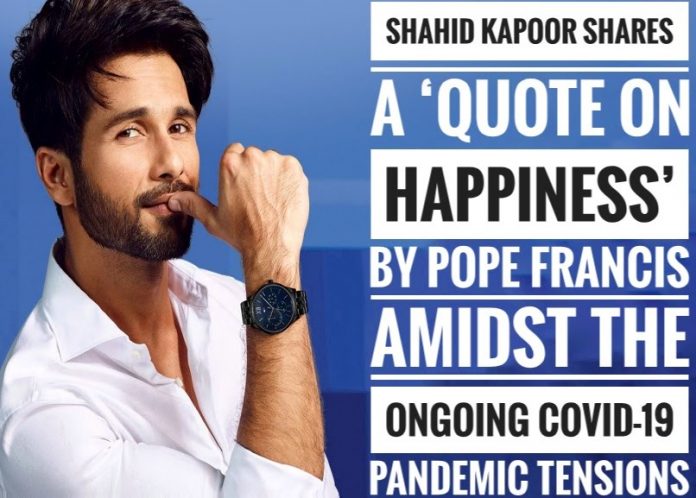 All Bollywood celebrities are quarantined with their families during the nationwide lockdown. Among them, Shahid Kapoor has been staying up with his wife Meera Rajput and kids Zain and Misha. The actor was pretty active on social media in the initial days of lockdown and left it very soon. At the beginning of the lockdown, Shahid had conducted ‘ask me’ sessions on Instagram and kept his fans entertained. He interacted with his fans directly and answered many questions related to his quarantine life and also revealed his routine during the shutdown.

Shahid Kapoor recently shared a note referred to as ‘Quote on Happiness’ by Pope Francis. The note shared by the actor means the most during the global crisis to spread positivity among people and reduce stress and anxiety. The note explains what it means to be truly happy and what a person should do in the wake of obstacles in life. The last and the most inspiring lines of the quote are “Never give up…Never give up on people who love you. Never give up on happiness, for life is an incredible show”, which means no matter how many obstacles you have to pass never give up, never give up on people who love you and care about you because they are the only ones by your side and are the reason of your happiness and never give up on your happiness as the life is incredible which keeps ongoing and every day is a new show.

The positive note by the actor rejoiced the fans and many of them took to the comment section and called Shahid ‘Kabir sir’ in the context of Saint Kabir Das and also congratulated him on completing 17 years in Bollywood. On the other hand, wife Meera Rajput has been posting photos of dishes she has been making for her family.
On the work front, Shahid Kapoor was working on Jersey remake before the lockdown. The cast included Shahid Kapoor along with Mrunal Thakur and Pankaj Kapur, directed by Gowtham Tinnanuri and produced by Allu Aravind, Dil Raju and Aman Gill. The film is about to come out by August 28, 2020.