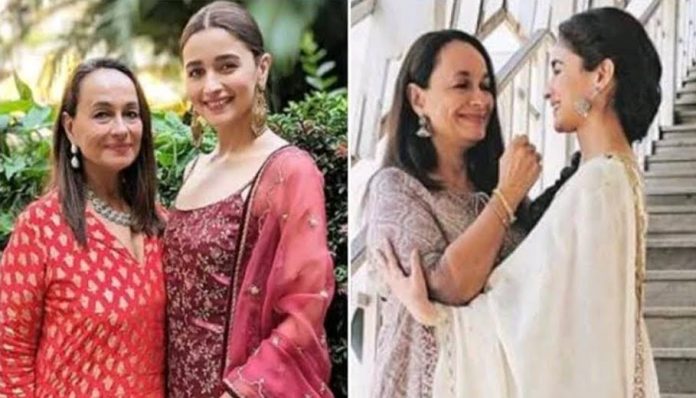 Soni Razdan is an Indian actress-director of British origin. Soni Razdan was born on 25 October 1962 in Birmingham UK. She is the mother of Bollywood actress Alia Bhatt. Soni Razdan is married to Indian film director Mahesh Bhatt. They have two daughters. Alia and Shaheen Bhatt. Alia Bhatt is a Hindi film actress. Pooja Bhatt and Rahul Bhatt are her stepchildren.

Soni Razdan shared a photo of her cat sitting on the chair beside the dinner table and she captioned it as “My dinner date last night” with the hashtag #picathecat. Her pet is very cute a Persian cat with bright dark orange colour also it is looking at Soni very with its big beautiful eyes. Soni keeps on sharing photographs of animals on her social media. This shows her love for animals. No matter it is a cat, dog or any reptile.

Soni Razdan started her career with English theatre. She then made her Hindi theatre debut with a closed door. She was seen playing the role of Sulochana in Doordarshan’s hit television show Buniyaad. She has also worked in many Hindi shows, including shows like Sahil, Gatha. In 2002, she decided to quit acting and try his luck in direction.

The serial “or fir Ek din” on Star Plus was directed by Soni Razdan. Apart from this, Soni acted in many Bollywood films. Soni Razdan married film director Mahesh Bhatt on 20 April 1986. When Mahesh Bhatt was studying in college, his affair started with Laurian Bright. Laurion’s name was later changed to Kiran Bhatt.

Mahesh Bhatt and Kiran Bhatt lived together during an affair with Soni. Because of this, Soni Razdan and Mahesh Bhatt converted to Islam and married again. Soni Razdan has two daughters Shaheen Bhatt and Alia Bhatt. Soni Razdan is also in the discussion due to her statements. Soni is a Kashmiri Pandit.

In an interview with the NBT, she says about the situation in Kashmir and the horrific treatment of Kashmiri Pandits, My family was from Kashmir, but years ago, they shifted to the UK. During childhood, Kashmir used to come and go. I have the same emotion towards Kashmir, which is in the heart of a common Indian. Soni was recently seen giving a statement about defending Alia Bhatt on the topic of Nepotism.