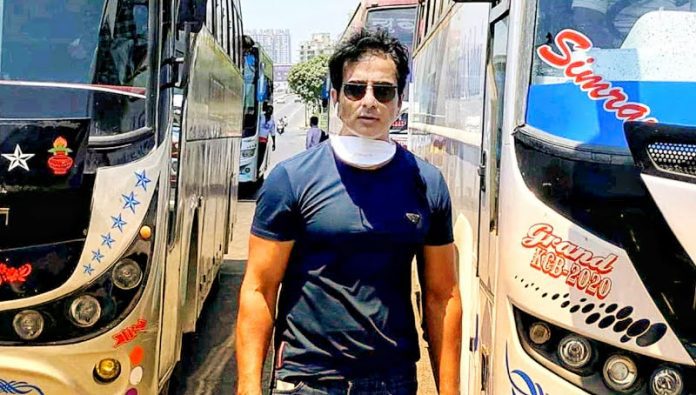 Sonu Sood is an Indian film actor and producer who worked in Hindi, Telugu, Tamil, Kannada and Punjabi films. He is the recipient of the Filmfare Award. On his account, there are many blockbuster films including the Telgu movie-Arundhati. He is one of the multi-talented actors as he could fit in any roles. He acted as a protagonist, antagonist as well as he tried for comedy and in every role given, he has been successful.

Along with being a reel hero, Sonu proved himself to be a real-life hero. Amidst the Coronavirus pandemic, the country was under the complete lockdown and as it was announced there were daily workers, poor villagers stuck in the city as their way to reach their respective homes were shut and they were left all alone in a city with no work and no money. Some had families and children to feed but can’t manage as the lockdown was announced, the workers were fired from their respective jobs. They were striving to return back to their villages and homes but had no option as transport services and everything was shut.

In such hard times, Sonu Sood started an initiative of sending the daily wage workers to their villages. In the early days of June, Sonu organized road transports from big cities to villages in order to help migrants. They were sent to Uttar Pradesh, Bihar, Jharkhand, Assam and to all their respective places. As a part of this initiative, Sonu says, “ I have barely been sleeping, spending 16-17 hours taking requests and spending time on the field. But I think it is the wishes of the migrant workers and their families that have given me the zeal to work. Their faith in me has been inspiring-that if Sonu has committed he will make sure that we reach home safely.”

Sonu did a pleasant kind and charity work and he had become a real-life hero for all those migrants. And for this noble work of Sonu, he is going to be debut in a book wherein Sonu Sood’s Journey from an actor to Migrant’s Hero is going to publish in this year by Penguin Random House in India’s Ebury Press Imprint.

Sonu Sood replied wittingly to a man who sought his help to meet girlfriend, check the actor’s reply here