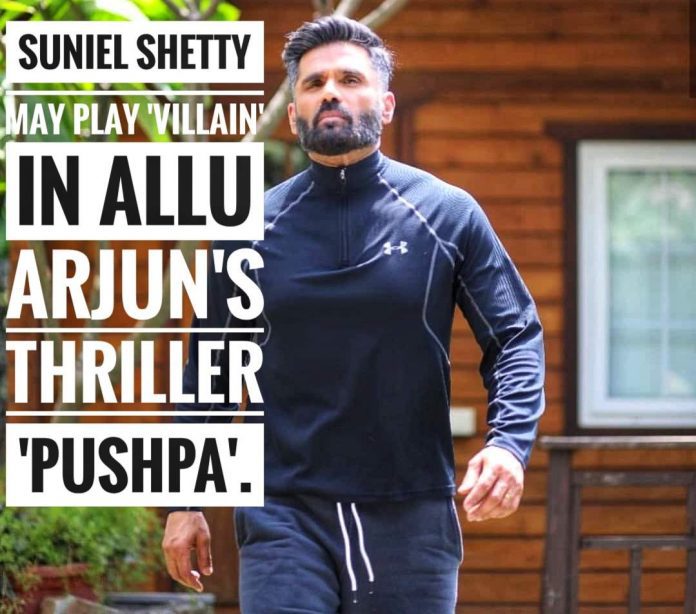 Sunil Shetty the owner of the popcorn entertainment private limited is an indian Bollywood actor and capitalist. The former has a wonderful span of his acting career of about 25 years in the film industry.

He left everyone spellbound with his acting in movies like Phir Hera Pheri and dhadkan .
He has also been awarded with Rajiv Gandhi award . Along with the acting in the Bollywood movies the actor has also been seeing acting in south Indian film industry basically in the telegu movies.

Sunil Shetty to be a villain?

Sunil Shetty has gained much fame and respect in the Bollywood but the actor has also planted his feet in the south Indian movie industry, he has maintained healthy relationships with everyone be it the people of Bollywood or the people of south Indian film industry .
His fans are present across the country . The actor is been appreciated for his bold roles in the films and action plays as well .

Allu Arjun is an Indian actor who works in the telegu films his father Allu Aravind owns aproduction house labelled as Geetha Arts.
Which is one of the top most production houses. The former is said to be the superstar of the south indian film industry.
Allu Arjun is on a new project , a movie, the makers of the movie have released the first poster of the movie and the name of the movie was revealed that is PUSHPA . The poster gained a huge appreciation from everyone and got eighty four thousand likes in just 24 hours.

The news in the air is that Sunil Shetty will be playing an opposing role against allu Arjun as a blackguard .
It was known that the team of the film went to meet Sunil Shetty in January to read him the script of the movie and that the latter also liked the script and agreed to do the movie .

The storyline of the film is said to be rum running and the movie is thought to be full of action with a short part of a romance that will be supported by actor rashmika mandanna.
There is no official revelation that Sunil Shetty will be playing a role in the movie yet !

Also on the other work front Sunil Shetty starred movies PHIR HERA PHERI 3 , HELLO INDIA ,MOSAGALLU AND MARAKKAR will be released on their respective dates after the lockdown gets over.
Sunil Shetty has done many action movies and they were all blockbusters. He has an inbuilt character and physique for doing bold roles along with action screenplays.
The former has always given his best in the films and has gained a huge fan following because of all his hard work in doing various roles.

The official announcement of him doing the role as a villain in the allu arjun’s movie PUSHPA will be out soon.
Also during the quarantine sunil shetty is show casing his culinary skills by cooking and helping his wife mana shetty . The video of him cooking was currently released in which it was seen how the lady of the house mana shetty was observing and guiding her husband’s culinary skills while the latter was cooking along with two other acquaintances.
Stay tuned with us to know more about your favorite celebrity’s personal and career fronts .