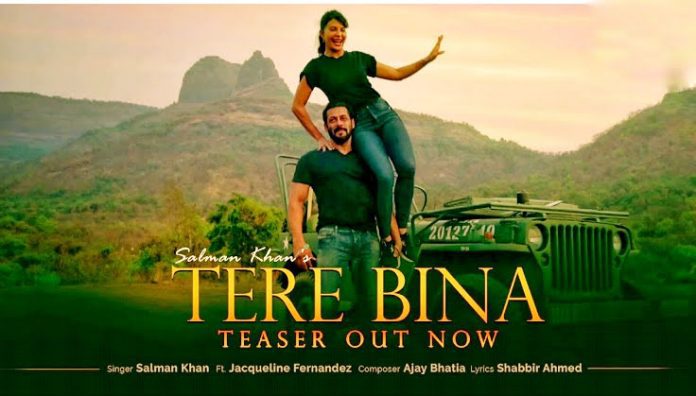 Salman Khan is back again with his new song ‘Tere Bina’, keeping his productivity high amidst the lockdown. The actor dropped a 30 seconds-long teaser on his Youtube channel. Salman Khan can be seen sharing the screen with his ‘Kick’ heroine Jacqueline Fernandez; the duo can be seen romancing, horse riding, biking and enjoying quality time together, away from the hustle-bustle of the city. As Salman Khan is quarantined at his Panvel farmhouse, the video is shot there itself with Jacqueline Fernandez. Salman Khan took to social media to announce the release of the teaser, captioned, “Tere Bina… wishing all mothers a v happy Mother’s Day.”

The song is scheduled to release on May 12. It is sung and directed by Salman Khan himself. The lyrics are by Shabbir Ahmed and it’s been composed by Ajay Bhatia. Salman described the song as, “Life is incomplete without that special someone, who lights up every moment of life. With them, every step is a chance and every day may be a new beginning.” Earlier Jacqueline and Salman opened about the video and shooting which are completed in four days amidst the lockdown. Salman said that the song ‘Tere Bina’ was not fitting any film, so he decided to release it like this.

Jacqueline shared, “We are wont to shooting for songs with big productions which take weeks of prep. But for this song, we were a team of just three people. For the first time, I was checking lighting, moving props around and taking care of the makeup.” However, editing the tracks was not easy, “Things were slow. Everyone’s using wifi, so internet speed was so slow that it took us 24 to 36 hours to download some files. Everything went back and forth about 70 to 80 times. Finally, we got our edit, our teaser,” Salman shared. The song is the cheapest production of the actor till date.

Last month, Salman Khan released a song titled ‘Pyaar Karona’ which urged people to follow social distancing, stay home and take precautions during the coronavirus pandemic. The song received huge love from the fans. Also, the actor has been supporting all the villagers living near his farmhouse.