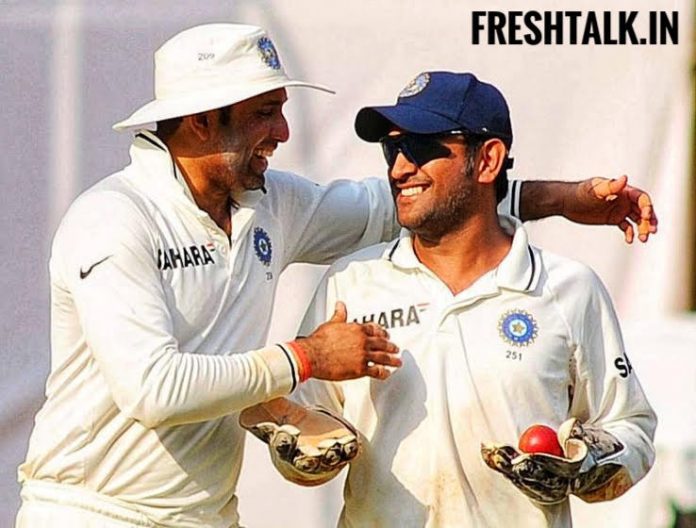 Former Indian batsman, VVS Laxman on Tuesday, shared a picture of the former skipper, Mahendra Singh Dhoni, praising him saying that, ‘His calling card was composure under pressure-cooker situations.

New Delhi: “Blessed with the rare equanimity of viewing cricket as a sport and not a matter of life and death, @msdhoni`s calling card was composure, especially under pressure. ” Laxman said in his tweet.
“The 2007 World T20 triumph catalyzed the stirring captaincy saga of a leader who talked through his deeds,” he added.

MS Dhoni started his ODI career in 2004 against Bangladesh. But failed to leave a lasting impression, as he did not have a good outing and only scored 19 runs in the three-match series. However, Dhoni still stayed calm and composed which is one of the main traits, He is known for by his fans.

The 38-year-old then proved his worth in 2005, six-match series in Vishakhapatnam, again against Pakistan as he scored 148 runs in the second ODI. The Veteran wicket-keeper-batsman still holds the record of the only captain to win all major ICC trophies (50- over world cup, T20 world cup, Champions Trophy.) Under Dhoni’s leadership, India won the Inaugural World T20 trophy in 2007. It was under his captaincy only that the Indian cricket team finally made it on top of the test cricket ranking.

In December 2014, Dhoni announced his retirement from Test cricket which was upsetting news for his fans. His retirement opened doors for cricketers likes of Wriddhiman Saha and Rishabh Pant to find a place in the Indian Test side. In 2017, In January 2017, MSDhoni stepped down as ODI captain and handed over the captaincy to current Indian team captain, Virat Kohli who has been ruling the hearts of all Indians since then.

Ex-captain, Dhoni and the skipper, Kohli enjoys a great camaraderie together. Kohli has been often spotted consulting a Dhoni and making decisions together in pressure situations.

While everyone was looking forward to the return of the former captain to the cricket field on March 29 in the IPL`s opening match between Chennai super kings and Mumbai Indians. Unfortunately, his return got delayed as IPL was postponed considering the serious condition of the covid-19 pandemic in India.