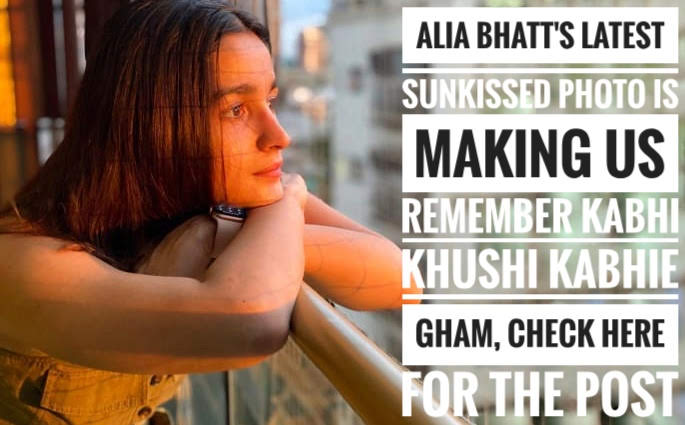 The SOTY actress posted a sunkissed picture of herself on Instagram writing – “Sooraj Hua madham”. She was looking at the sun going down as her caption suggested, and was enjoying the sunset in her balcony.

Famous director Karan Johar, who had directed Alia Bhatt’s first movie was also the director of Kabhi Khushi Kabhi Gham which was released back in the year 2001.

No doubt this movie was super hit and people still can’t get over it. The songs and the dance steps too had got extremely famous, one of which was Alia’s caption- Sooraj Hua madham.

By posting this song, Alia reminisces about this movie- KKKG.
There are only a few people who are not aware of KKKG. Like who doesn’t know about pooh?

There are some movies that are not just movies but remain forever in one’s heart and not to brag but KABHI KHUSHI KABHI GHAM is one of those. It’s a movie which stays with one lifelong. A movie with relatable and practical things.

A movie about how western and Indian cultures vary and it was definitely a perfect theme to capture the Indian audience.

The theme of the emotional connection too attracted the Indian audience.

This movie has truly shown the value of Indian culture and heritage.

Not only all these things but also the little things that were added in the movie that made it even more irresistible to like such as the use of our National Anthem- JANA GANA MANA by Rabindranath Tagore made the audience feel the love for their country and its culture. It also showed that living abroad doesn’t take away the loved one has for their country.

Alia reminds us of such an unforgettable movie by Karan Johar. Since lockdown is going on and no new movies are being released right now, we can just put Kabhi Khushi Kabhi Gham on our TVs and watch it with our family to reminisce the old times. It will definitely be worth to experience it all over again after a long time.