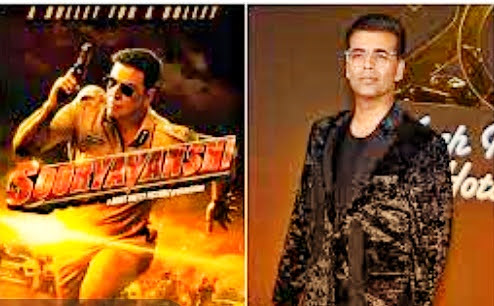 Late on Wednesday, there was a rumour viral on social media that Karan Johar has been discontinued as a co-producer of the much-hyped Akshay Kumar and Katrina Kaif starrer Sooryavanshi, has been discrete as fake news by the makers.

Soon, the film’s producers and presenter Reliance Entertainment were confirming that the news is incorrect.

However, trade analyst Taran Adarsh tweeted to say that Karan is very much still a part of the project. He wrote on Twitter: “IMPORTANT… News doing the rounds of #KaranJohar not being part of #Sooryavanshi is untrue, clarifies #RelianceEntertainment.”

Karan has been at the getting a lot of hate after the death of actor Sushant Singh Rajput. He has been blamed for backing nepotism in the industry and advertising star kids. leading to a debate on Bollywood’s treatment of outsiders.

In the upcoming film, Akshay will play the lead role of Veer Suryavanshi, a character that was introduced as an Anti-Terrorist Squad (ATS) officer in a cameo role in Simmba.

It is the fourth film in Rohit Shetty’s cop universe. Other than Akshay Kumar and Katrina Kaif, the film also features Ranveer Singh (who played a police officer in the 2018 film Simmba) and Ajay Devgn (who starred in the cop series Singham ).

Sooryavanshi, which was earlier slated to releasing in theatres on March 27, is now scheduled to release on Diwali, reported trade analyst Taran Adarsh.

Sooryavanshi and ’83 announced their theatrical release dates, Check here for the dates