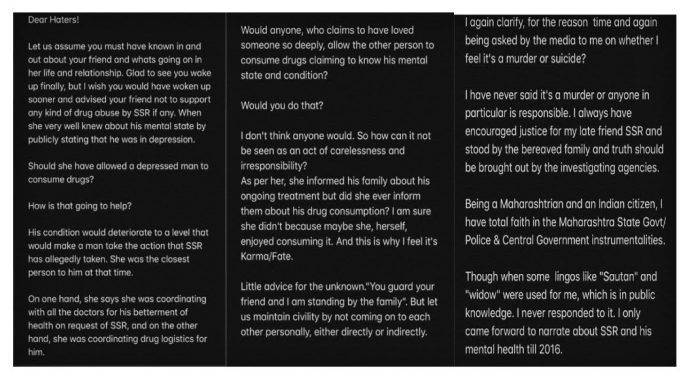 Ankita Lokhande, on 9 September 2020, shared an open letter on her Twitter handle. She questioned Rhea that why drugs were being given to Sushant even though she knew that he was depressed. She declared that she didn’t accuse anyone of his death. Even she asked as to why she is being asked time and again if his death was a suicide or a murder. And that Rhea should have been responsible for his health.

Followed by this tweet actress Shibangi Dandekar attacked her on her Instagram stories calling Ankita ‘Princess of Patriarchy’.
“Such a grotesque letter by @lokhandeankita This princess of patriarchy who has never dealt with her own relationship issues with Sushant, clearly she wants her two seconds of fame and has capitalised on rhea being targeted. She has played a major role in this ‘witch-hunt and she needs to be called out! She also just needs to shut the hell up. Enough Ankita! No one has more hate in their heart(?) than you.”

Actor Karanvir Bohra had his back on Ankita calling her ‘loving and responsible’ and that he knew her when both of them were in a relationship.

“I’ve known u back when u & Sushant were together, @anky1912 I’ve seen how loving & responsible u were with him. If things didn’t work out, they didn’t work out, but it’s sad 2c individuals taking personal jibes without knowing you and him. #istandwithyou #AnkitaLokhande,” he wrote on Twitter today.

Mrinalini Tyagi, who played the role of Archana and Manav’s daughter criticised Shibani by tweeting, “I think it’s very much evident and clear that who needs 2 secs of fame. Can’t even compare Ankita Lokhande @anky1912 with Shibani Dandekar @shibanidandekar. Roses are red and violets are blue 2 secs ka fame Ki Baat karne vali apna work profile to dekh le tu (you talk of two seconds of fame, but take a look at your own body of work),” she wrote.

Rhea Chakraborty was arrested on Tuesday by Narcotics Control Bureau for allegedly procuring drugs for Sushant.