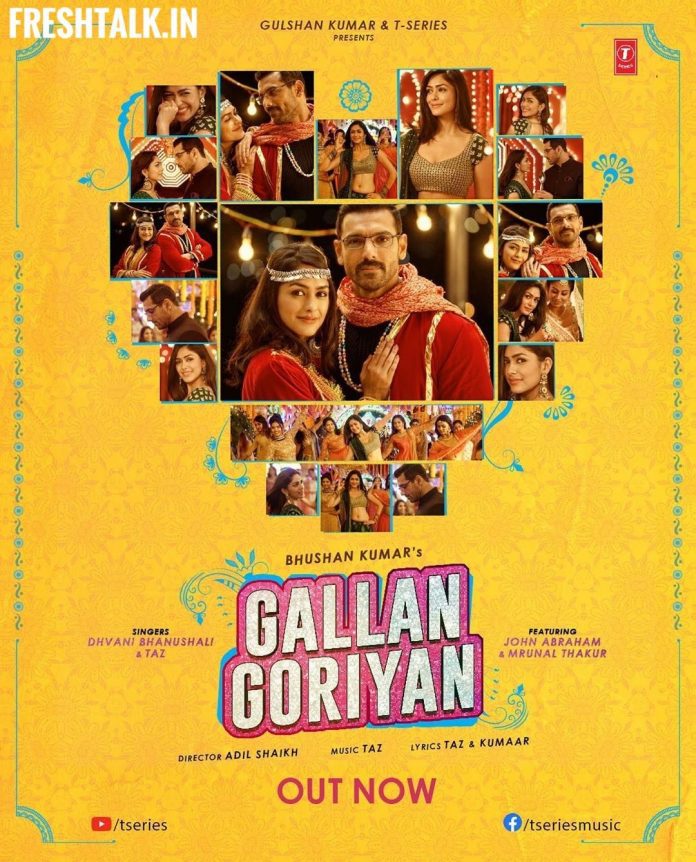 John Abraham and Mrunal Thakur after the success of Batla house once again are screen buddies in a single music video ‘ gallan goriya.’
The song is crooned by Dhvani Bhanushali and Taz who has composed the track and penned lyrics with co-writer Kumaar. The teaser of the song has been released 2 days ago and that 18-second teaser got 369K views.

As the official date for releasing the song is 11 June and so the song is now available on T-series official, you tune channel and widely on platforms like Jio Saavan, Spotify, Hungama, apple music, Itunes and google play. This is an out and out fun dance song by Dhvani and Taz who understand the kind of music the gen-X audience relates to.

In a very short span of time of 15 minutes, the song received 26k views and 500+ comments on T series youtube channel. Bhushan Kumar of T series is elated to work with John Abraham once again and Mrunal Thakur had a remarkable performance in Batla house. And this time they reunite fir reply dance track. This is the newest song of T -series and a funny, party type song. This time both the actors are around to have the audience up and dancing on their feet.

Both the actor groove to the vibrant peppy track that has chartbuster written over it. If looks are anything to go by it seems like your standard Bollywood song. Mrunal revealed that it was co-star John that helped her ease into the sequences. This was her first time doing a
typical nach gana and glad to have had tha experience Although she was quite nervous.

Mrunal Thakur and John Abraham, both the actor bring the song to life. The song has a catchy tune and great lyrics. Although people have questions like “is this song is a part of Batla house ?” Which is released now…But the song a very good gift for the fan following of John Abraham and Mrunal Thakur in amid lockdown.

Though John Abraham has made rare appearances in music videos so far. Last time he laid his tribute to our brave corona fighters in ‘ Mera Bharat Mahaan .’ John Abraham and Mrunal’s chemistry is the highlight of the upbeat track. And we also hope that this video get as much love as expected by the video composer, artists, Bhushan Kumar and obviously Dhvani Bhanushali and Taz.