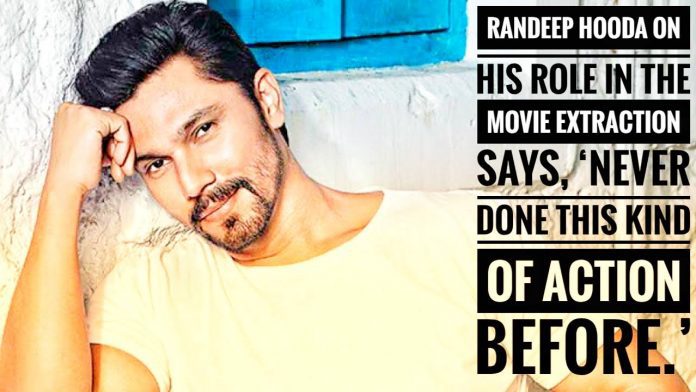 On this month of April (24/04/2020), the movie, Extraction will going to be released where we will see Randeep Hooda in the role of Saju. Here, Saju is the man who is responsible for bringing Hemsworth’s Tyler Rake to the extraction of his boss’s child. The film also features Rudhraksh Jaiswal, Pankaj Tripathi, Golshifteh Farahani, David Harbour and Priyanshu Painyuli in key roles.
In the movie trailer, Randeep Hooda and Chris Hemsworth feature in a stunning knife fight sequence.

Actor Randeep Hooda said that the movie, Extraction gave him a chance to step out of his comfort zone in Bollywood film to do some Rambo-like action with tough Aussie, Chris Hemsworth.

The actor told a group of journalists that-
“My character, as they assert , is that the wrecking ball. He is liable for Chris and other characters involvement. His people don’t have the money so he feels that we will just keep them the job and when it’s time to pay, he will just whack them out and take the boy home. But it seems that Rake may be a tough Aussie and you can’t get past that.”

He also said that-
“I got an excellent gun and that i was waiting to fireside some blanks and be like Rambo. I’ve never done this kind of action before. It was really, really cool. The stunt in this movie was absolutely amazing whether it is driving, guns or hand to hand combat. The first day, I thought what have I got myself into but then it’s started to grow on me. Your body is that the most beautiful instrument you’ve got and action movies put it to good use. As you stretch your limits, you realize you’ve got to look after yourself better.”

Randeep Hooda stated about Chris that-
“Chris is a tough Aussie. He is charming, very easy going, well-prepared and he has got great energy. The actor during a film controls the energy on the set. It has been an absolute pleasure working with him. We exchange a few blows but that’s okay. He is a quintessentially easygoing Aussie who doesn’t have any airs about him. ”

Randeep Hooda addresses the stunt coordinator, Sam Hargrave, who has previously worked on the last two Marvel movies and Captain America star Chris Evans as stunt coordinator. He praised him by saying-
“He was quite in charge. He makes choices that are not dictated by this scheme but the environment. He is able to experiment, very confident and hospitable suggestions. He would be hanging to the cars, hanging off stuff and if you’re slump a building, he would even be on a rope and falling with you. I have never worked with a director who is additionally an action guy.”

The actor Randeep Hooda has previously starred in some famous Bollywood films like Highway, Jannat 2 and Kick. But this time we all are waiting to see something different.