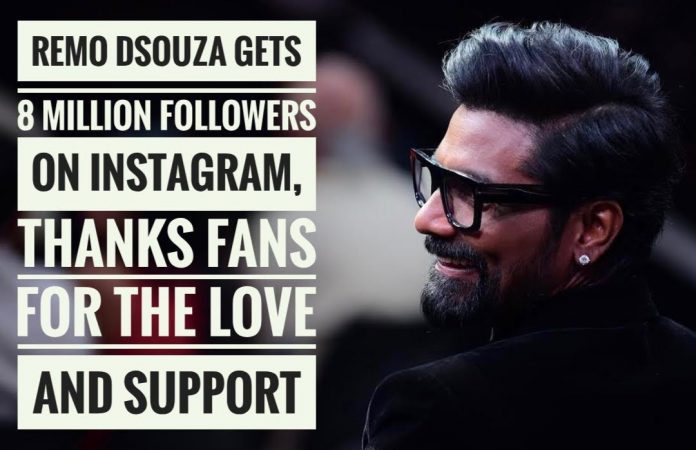 The very talented choreographer, actor and a film director Remo D’Souza hits the benchmark of achieving 8 million followers on Instagram. We have seen him in many TV shows as a judge and even in movies where he choreographed and acted too!

Remo shared a video on his Instagram account presenting his happiness to the world and thanking all of his followers. The video presents him in a slo-mo video adjusting his hat! And believe me, we have been looking at it non stop since then!

A little About our DanceGuru Remo!

The 46-year-old Dance Guru hails from Olavakkode, Palakkad, Kerala, and was born on April 2, 1974, in Bangalore to K. Gopi, a chef in the Indian Air Force, and Madhvi Laxmi. He’s married to Lizelle, an Anglo India from Mumbai. D’Souza was a judge in the TV show Dance India Dance, which got very popular among us Indians. He also judged the show Jhalak Dikhla Ja which got aired on Colours Tv!

All these years of him being a Judge on tv shows, he also directed his first movie F.A.L.T.U which didn’t really make as much money and was almost as moderate as it could be. He then directed his 3-Dimensional Dance movie “ABCD” (Anybody can dance) and “ABCD2”. All this while his extraordinary amazing moves got him many awards!

To reward him for this hard work and excellent talent, awards and love to this God of moves, he celebrates his achievement of having 8 million followers on his Instagram Handle. Showers of blessings have been poured upon him by his fans of the country and abroad. We wish him many more years of luck and the desire to see more of his moves for a long time.