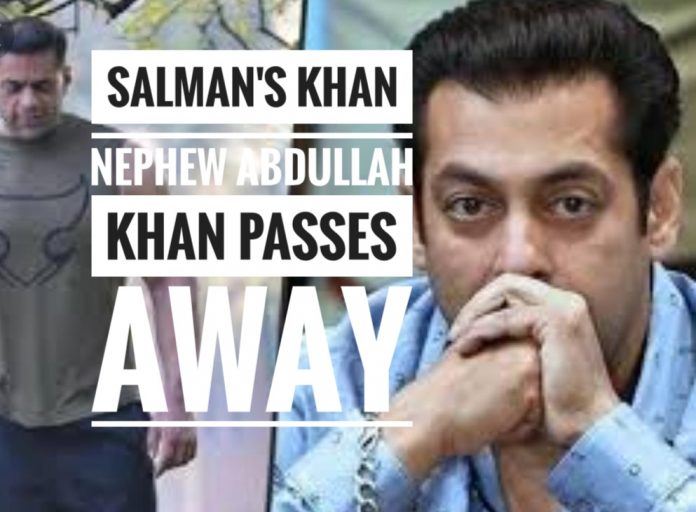 Abdullah khan was a body builder and a fitness freak. He Used to do a lot of work out and was renowned for his physique.
He was Salman Khan’s paternal cousin’s son and he had trained a lot of people relating to the workouts at of the gym and maintaining a good health .

Abdullah was suffering from diabetes from a long time and was also suffering from a heart ailment . Two days after he felt uneasy he was hospitalized after that .He died on Monday in lilavati hospital on Monday.

Salman khan is really sad that he couldn’t attend the last rites of his nephew due to the nation wide lockdown to prevent the spread of COVID -19 (corona virus)
Abdullah’s uncle Matin khan stated that Abdullah khan at the age of 38 died of an heart ailment .his last rites will be performed in Indore since his parents live there and Abdullah’s body is taken by road to Indore
Many of the celebrities who were close to the Bollywood’s superstar Salman khan offered their condolences for his nephew .

Actor Daisy shah posted Abdullah’s picture on twitter and tweeted
“Will always love you my bestie..#restinpeace.”

Actor Rahul Dev offered his part of condolences by tweeting
“SINCERE CONDOLENCES AND PRAYERS
STRENGTH TO THE FAMILY .”

Salman loved Abdullah khan from the core of his heart and when he came to know about being sick he made him shift to another hospital in bandra .
Abdullah was not much into Bollywood and B-TOWN’S talk . He kept him self away from the media and Bollywood but kept himself updated and active on his social handles like Instagram and Twitter etc.

It was a shock for everyone after hearing the demise of Abdullah khan. Salman khan’s family who is currently in the lockdown are in his panvel farmhouse are mourning over Abdullah’s demise.
Salman khan also posted a picture of him standing with Abdullah khan and tweeted
“Will always love you ….”

We all share our condolences on this heartbreaking news on the demise of this wonderful ,dedicated and laborious body builder .
He will surely remain in everyone’s heart . And we all will always love him
We are sure that Salman’s family is still in a state of shock and our remembering Abdullah khan ,their dearest family member.
We hope our dear departed rests in peace . We all miss him and surely love him . He will remain in our hearts forever .
We hope Abdullah’s family will be strong and pass this time of fate by being together.